Review of Beyond the Wall and other Adventures 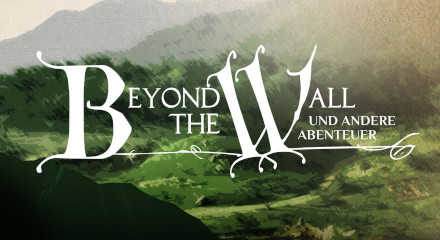 Today we want to give a short overview of what’s it like to play Beyond the Wall, what the differences to other systems are and for whom it might be.

This review was written in collaboration with Benjamin Dose of Ludo Liubice e.V. and first published in German. A big thank you to Benjamin who also was our Game Master of Beyond the Wall for multiple evenings!

The OSR-Movement (Old School Renaissance / Revival) wants to capture the style of play of the first Dungeons & Dragons editions. At this time the players were new to such kinds of game and headed into the game with bewitched eyes and also explored unknown, dangerous dungeons in a clumsy style. Deadly traps and monsters killed their first character but those players of a new type of game were tenacious and motivated to keep on going. They created a new character and headed back into the game. Until now, we know that at the end of a story or dungeon the biggest monsters and enemies await as does the big bad evil guy with valuable treasures!

The urge to go back to those old days started with more and more complex rulings in later D&D editions. Players and Dungeon Masters craved to play in this old fashion they enjoyed in their youth. And the OSR-Movement began and people went back to the root ingredients of the D&D White Box edition: A d20, attributes, armor class, saving throws and spells. First old school retro clone systems were created: OSRIC, Labyrinth Lord, Swords & Wizardry... and many more. Until today, new retro clones are published and Beyond the Wall is one of those systems with a firm grip on the OSR tradition.

Review from a Game Master

Beyond the Wall as OSR-Game… and beyond that

And why should you play this retro clone if there are many others? Because Beyond the Wall solves some aspects in an elegant way that are in today’s perspective not up-to-date and for some players (that didn’t have the root D&D experience of the first editions) more frustrating than fun.

First of all there are fate points: A meta currency to skip death if the player had some bad luck with his or her dice. This softens the core dilemma of having few hit points and a fast death at first level. But fate points can also be used to support other players actions or reroll dice in general. The second change in terms of game play is the character creation. The character creation was based on rolling random results and had a chance of creating characters with different levels of power. To prevent these situations a system was developed that described the childhood and youth of the character but also granting the character attribute advancements and talents. Both on the same scale and adding up to the same sum for every player and therefore more balanced.

Creation of Characters and Village

Beyond the Wall is about a village (beyond the wall) and the adventures that are coming up around it. Based on the situations that arose in the characters youth the relationship between the village but also the villagers are described. While rolling on those tables of events of the characters past the character also levels up from level 0 to 1. The tables are specific for each class and grant the player the possibility to design a location and non-player character in the village. Each event comes with a bonus to an attribute and/or a talent. All attributes increased this way add up to the same sum for each class. This doesn’t mean you can’t roll up a high constitution wizard or a really strong thief.

The relationship between the player’s characters, the NPCs of the village but also the village itself give the world the group is creating a feeling of being alive. These people in the village are friends, family and neighbors, so going on adventures and risking your life for them is motivated by those bonds.

In the core book are several adventures ready to play. One of them is The Angered Fae and it is explicitly designed for beginners. It is a zero-prep adventure and can be run by reading the book only. The structure of the adventure is enough to run it while playing. It is also flexible enough to let the player’s creativity change the outcome of certain situations. In the spirit of OSR traditions a core element of such adventures are random tables.

In some more advanced adventures those random tables might be blank to fill in with NPCs of the village. This can be used to further develop the bonds the characters made in the story as motivation.

Review from a Player

Beyond the Wall is a flexible yet easy TTRPG system. One rolls with a d20 and tries to roll lower than a certain attribute in case of skill checks. For saving throws and attack rolls one needs to roll above a certain threshold. This threshold is defined by the character’s or targets stats. That’s also the hardest part to get right. Rolling lower on skill checks and higher on saving throws and attack rolls.

The different classes have different random tables for the events of the characters past. Those tables determine the background, talents and certain class features of the character. A thief for example might be highly skilled and has more talents then others. He also is chosen by fate and thus has an increased number of fate points at the start. This way, every character feels individual but also has enough potential for a solid role playing experience.

As a player, character creation is always a mechanical and/or intimate process. I create the own character that will be played by me. In Beyond the Wall the players also create the village, the home of the characters. Random tables confront the player with situations like “Your father was sentenced for a crime he did commit”. Well that is interesting. How did it affect my character and the village? What does that mean for my character? Who shared the trade of pick-pocketing with the thief? Where did the wizard find his spell book he studied for so many moons? Questions with the potential to include other characters into your background story.

These hooks are created as part of the character creation. Locations and NPCs are generated by the player group. This links the characters to the village and make it their home. And home is the one you protect, home is where family and friends are. The character loses the tag of being a throw away character. Some earlier versions of D&D were so deadly that some players considered creating a background story and motivation for the character on later levels. Beyond the Wall is nevertheless deadly. Death is still part of the job description of an adventurer!

Beyond the Wall was a lucky find for me! I bought it on a whim at the Nordcon 2018 and played it dozen of times with different groups. I wasn’t planned in times of the White Box but because of Beyond the Wall I got a good impression of the fascination of the OSR-Movement. It also got me more motivated to get myself into random tables, treasures, loot and monsters of all kinds. The book is also well made and has an excellent layout. I really enjoy reading it over and over again!

For round about 25€ one gets a complete TTRPG with rules, classes, adventures, bestiary and treasures. In short: enough material for many hours of fun together with your friends.

Beyond the Wall captures the feeling of old D&D editions. Rolling on random tables is still fun. Every time some attack or spell hits, the dangers of the world and also the mortality of the characters are brought back to mind. And still Beyond the Wall feels modern and not like an old grimoire with a layer of dust on it.

Not every encounter needs to be handled with violence and ends up in a fight. Not every session leads to conflicts with violence being the core or into dungeons that contain fight after fight. Traps, riddles and social interactions in the village, the world that is built by players and GM together or in those old dungeons give a fuller picture of a TTRPG written and published in modern times but wearing the cape of the old days.

Newer TTRPG systems are too heavy for you? You are into “like in the old days” but dying with a 1-hp character is annoying to you and a character without motivation bores you? Beyond the Wall is just the right game for you!

You want to experience D&D in pure and true™ and not some softy system? Background stories for your characters are only necessary after hitting level 5 because your character survived for that long already and might in the future? And who didn’t lose a character in the first room because of one hit, doesn’t know what D&D is like? Then you might want to consider playing Dungeon Crawl Classics ;-).