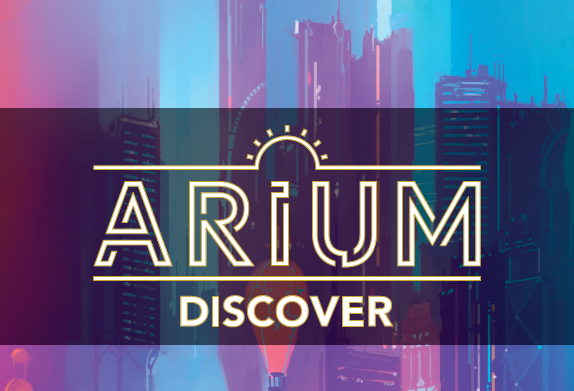 We created the world of Aeros with Arium: Create and had been planning to visit the world with Arium: Discover for a while. It is a steampunk world with the existence of aliens and airships. In Tricube Tales we started our journey and came across a passage that would lead to unknown worlds. That’s where we started, converting the characters from Tricube Tales into Arium: Discover and experiencing a hexcrawl based on the Mausritter Hexcrawl Templates and the suggestions and rules from the wonderful The Vast in the Dark* .

But what does Arium: Discover offer us after Arium: Create is a world-building tool or method?

Arium: Discover picks up where Arium: Create ends. We created our world. The Big Picture, the places, the cultures, the characters, and also McGuffins or other gadgets or objects of the world. We can now use one of the created characters from Arium: Create or create our own character to play in this self-created world. It’s not a polished world yet, but it’s enough to play this sketch of a setting and fill it with more life during or afterwards. It’s about discovering your own world, and Arium: Discover offers us a full-fledged role-playing game for as many genres as possible.

Since Arium: Discover is a generic role-playing game, it offers different game modes for different types of games. What the game mode selection actually means is how competent the player’s characters are. The game mode indicates how many Discovery Tokens a character has at the beginning and the maximum number it can have during a game session. At the same time, it gives the number of points for the attributes during the character creation through the game mode. Arium: Discover distinguishes the following game modes:

Heroic. This is epic fantasy or the story of superheroes. The challenges seem impossible, while the characters themselves can still have their slice-of-life situations.

Normal. These are the stories of ordinary people, like you and me. They have no superpowers and are no more powerful than the other characters in the world. They might be on the trail of a mysterious disappearance or protecting their small village from the evil world.

Hardcore. This mode is for people who like it a bit more realistic and deadly. In the rulebook, the reference to Game of Thrones is made with the kind words “We’re looking at you, George R.R. Martin”.

Character creation goes through 8 phases. The character concept is about what the character’s name is, who this person is, what their personality is, what they look like and what goodies they have. After that, the CP are determined based on the game mode and distributed among the primary attributes. After that, the derived attributes are calculated and Qualities or Goodies are acquired with any remaining CP. These Qualities and Goodies must have a cool name and describe what they are for, whether negative or positive. This is similar to the aspects from Fate or the tags and trademarks from Neon City Overdrive. Finally, the Discovery Tokens are determined and you’re ready to go!

The primary attributes of Arium: Discover are broad and as follows:

Mind. Are the intellectual abilities of the character.

Body. The physical ability of a character. Also tells how attractive the character can be to others.

Spirit. The connection between a character and something higher. This can be faith, a set of values, luck, technology, or magic.

Heart. Portrays the passion and affection.

Derived attributes include those values that are related to the primary attributes.

Awareness. Perceptual skills and competence to take in information.

Defense. How well the character can defend itself.

Offense. How well the character can attack (regardless of weapon or type).

Personality. The appearance of the character and how well they can influence others or draw attention to themselves.

Stamina. How good the character’s stamina is and how it can resist pain or exhaustion.

Willpower. The power of the character to resist mental manipulation or trickery.

Health. The vitality of the body.

Resistance. The passive resistance to damage and passive defense of the character. Can be increased by active defense.

If you want to quickly create game characters or choose certain archetypes as a concept, there are templates in Arium: Discover. Thus, there are:

Each of these templates not only has the primary attributes distributed according to the game mode, but also has two CP open so that some customization can take place.

A goodie is a special item, relationship or supernatural ability in the setting or from the character. It can be, for example, a steam-powered grappling hook. Goodies, like game characters, have qualities. These so-called qualities can be divided into Boons / Banes for characters and Features / Flaws for goodies. However, the idea is the same: boons or features are positive qualities of the character or item and banes / flaws are negative qualities. As an example we use the steam-powered grappling hook:

Steam-powered Grappling Hook
Feature: Can hook into solid materials.
Flaw: Takes some time to cool down.

Boons and Banes from the character are more based in the person. So a Boon could be that you have military training behind you or you are very skilled in a special craft. Banes are exactly the opposite, e.g. one has bad luck, has memory lapses, a poor education, or one is being persecuted. On the rules side, a sample is checked to see if a quality or goodie can be used to make the sample easier or more difficult. For this you choose when defining the quality or the goodie, which effect Boon / Bane, Feature / Flaw have. The choice is given in the rulebook and is something like +2 or -2 dice to the dice pool.

In Arium: Discover we have a dice pool system. When the game master asks for a sample, he chooses an attribute for the sample. At the level of the attribute, dice make up the pool. The Qualities and Goodies are looked at and checked to see which ones apply and change the dice pool. A success in Arium: Discover is a 5 or 6. Advantage increases the chance of a success, so 4, 5 and 6 count as a success, and a disadvantage decreases the chance to only 6. Depending on the situation, the GM distributes advantages and disadvantages to the sample. At the same time, the GM sets a difficulty, which means that 1 – 6 successes are necessary for a successful sample.

Another type of tests in Arium: Discover are the extended tests. Here, the dice are rolled for a longer or more complicated task. An extended test has three phases: Preparation, On-Going, and Resolution. In each of these phases at least one test is rolled. In the on-going phase, the GM can ask for 1 – 3 tests. However, these tests influence future and subsequent tests of the extended test. So a good preparation is rewarded by the rules. However, it is only with the resolution that the entire outcome of the situation is determined. Building an apparatus serves as an example here. Using a blueprint, one plans the project and works on it, but only when all the parts have been put together and one turns the switch to “on” does one know if the apparatus will work.

Discovery tokens in Arium: Discover represent meta points. They are distributed when a character fails a test where one of the Qualities are used, and they are taken when the person playing wants to add a die to the dice pool, pass a standard test or a step of an extended test automatically, or throw in “Yes, and…”. The latter is restricted to only one condition. Players may use two Discovery Tokens to say “Yes, and…” and establish a fact. However, no things may be brought into the Arium and thus the story that go against the canon of the Arium. So you are not allowed to overwrite something, but only to introduce or change facts that do not conflict with existing statements.

Tips & tricks are still given in the game master section. For Arium: Discover specifically, there are templates for enemies where the attributes of an opponent are scaled abstractly depending on the difficulty of the enemy. These go from underlings to bosses and allow you to quickly create enemies. At the same time, it is nicely described how an underling can become not only a boss, but also an NPC. Otherwise, Stars & Wishes, group tests, how to deal with temporary buffs and debuffs as well as the further development of the characters are discussed.

The latter is only briefly touched upon, revealing that after a chapter of the story, characters could increase an attribute, get a new feature for a goodie, or get a boon for their character itself. In the not-yet-released Arium: Evolve, more detailed ideas for character advancement will be conveyed.

For me, Arium: Discover delivers what it promises. It provides a generic and fledged out role-playing game for the worlds created with Arium: Create or Microscope or whatever method. The character creation was a bit fiddly, as Boon / Bane, Feature / Flaw said the same thing at the core, but felt like it led to a cognitive overload when introducing the system. The game is lightweight and played quickly in any situation. For multiple checks in a row, as you have with other systems, the extended tests are probably not made, but rather for long-running projects. That’s where the game got out of the good flow a bit, it seemed to me.

Since we played Neon City Overdrive two days earlier, the overlap between the two systems also came to mind. To draw a comparison. While both systems want to achieve something similar – because if you take away the setting and design the trademarks / tags yourself, you can use Neon City Overdrive great as a generic engine – it seemed to me that Arium: Discover is a bit more formalized in some places. Boons / Banes or Features / Flaws are tied to specific effects, whereas in Neon City Overdrive there is one less or more die in the pool.

What I like, however, is that Arium: Discover with control and complication takes up a success or failure narratively. Some other games, if they have something like partial successes, usually have successes with a negative consequence. So it’s very nice that with lucky dice rolls, the players can also contribute something positive to the narrative!