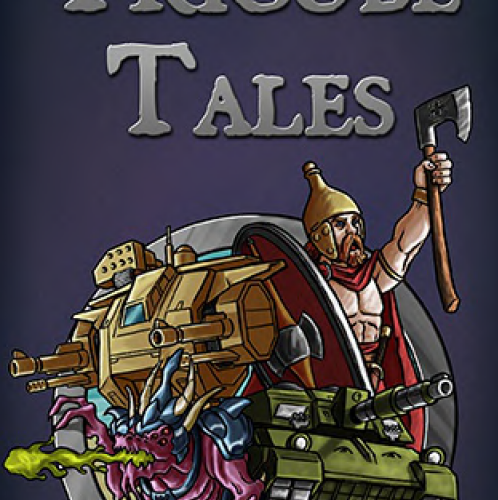 After our trip into the forest of the fairy queen, today follows a short and crisp reading review of an equally small and light role-playing game. Tricube Tales is a small generic role-playing game that allows us to create a character in a few minutes and just start playing. The setting or genre is neither predetermined nor in the way.

Tricube Tales has a small set of rules on which to base. Much is handled through character description and narratives.

Character creation doesn’t take much more than one sentence. “An agile journalist with spider-like superpowers and a propensity for cracking jokes.” is one of the examples from Tricube Tales. However, we already have the core of character creation here. We have to define an archetype. An archetype consists of a trait (agile, brawny, crafty) and a concept (usually a vocation). In our example, “agile journalist”. Then we choose a perk and a quirk. In the case of our witty spider superhero, these are already both a perk (spider superpowers) and a quirk (the tendency to joke).

Each character then receives a total of 6 markers. Three of these markers are resolve points and the other three are karma points. The game assumes that you have all the equipment you need for the concept.

When the game master calls for a skill check, a difficulty – usually in the range 4 to 6 – is set. Now the player checks whether the character concept fits for this sample. If the trait and the concept fit, i.e. the whole archetype, then the player gets 3d6 for the check. In case only the concept or a trait fits, the player receives 2 dice for the sample. If nothing fits at all, then only 1 dice.

To pass the test, one die must be equal to or above the difficulty. The dice are not added together! If several dice show a success, then one achieves an exceptional success. Accordingly, the states can be defined as follows: Exceptional success, success, failure, exceptional failure.

Combat and complex obstacles follow similar rules. Each complication of the obstacle or the strength of the enemy is represented by effort tokens. For this, several checks (one for each effort point) are often made by the interaction of the group. For example, repairing an airship’s engine can be a mechanically complex process, which not only requires the repair by the engineer, but also makes it necessary to switch the ignition back on at the right moment and to add enough coal.

Adding a quirk to a rehearsal increases the difficulty by 1, but you get a karma point back on a failure and can choose to regenerate either karma or courage points on a success.

In case of success or failure, the narrative is influenced by this. On failure, a complication or other negative consequence should follow. Such a consequence can be that the character loses his courage and therefore has to give up one courage point. If all courage points are lost, the character is considered defeated and is out of action for the scene. At the same time, the character receives an affliction from the game master. This is to be treated as a temporary or even permanent quirk. A permanent affliction also reduces the karma by 1. An example could be a broken rib or the curse of lycanthropy.

An advancement should happen every 1 – 3 game sessions and results in a new perk or quirk being developed, an affliction being changed into a quirk. Every two ascensions the maximum number of karma or courage points can also be increased by 1 to a maximum of 6.

For this review, the phone PDF was available and was also read on a smartphone. You can see the low-resolution graphics on the computer, but the PDF is easy to read on both devices. The pages are clearly laid out and also have short sections. No section goes beyond one page and the rules and regulations are quick and easy to understand as well as to read. There are even many illustrations in the short PDF (59 pages are based on these short Phone PDF pages), which carry a generic flair. According to the author, Tricube Tales is best played with system-neutral settings, as no rules have to be reproduced, but can be freely designed.

From page 37 onwards there are references to genre-specific rules. For example, non-human races, magic and psionics, sieges and battles, superheroes, the supernatural, etc. are discussed. Even for DnD-esque games, a possibility for different strengths of monsters is briefly dealt with.

All in all, Tricube Tales is a small and fast generic role-playing game that gets by without a lot of frills. The rules are limited to the bare essentials and the abstract character creation offers a lot of different possibilities for the players. Here, too, the focus is more on the narrative, because those who can introduce their special features and concepts well receive more dice for the skill check. This rulebook is ideal for all those who just want to play or want to explore a setting without big or complex rules. The only thing missing is a short overview of the rules, which would be a great addition to the game at the table or online.