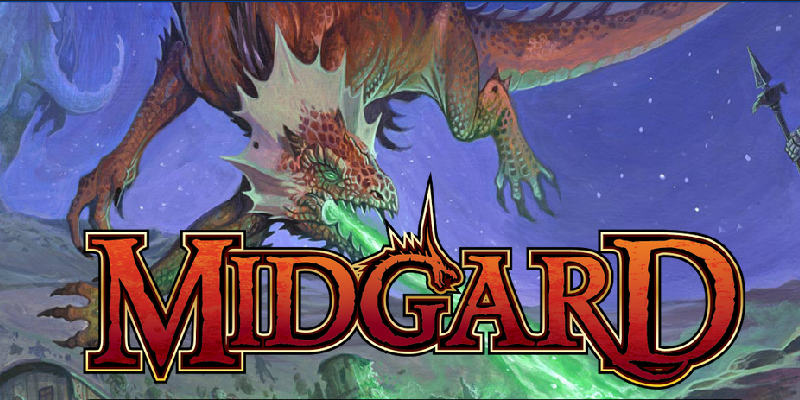 Midgard is a setting by Kobold Press. Kobold Press has set some of their products in their own world and advertise this as a Dark Fantasy setting with deep magic and inspiration from myths of Eastern and Central Europe. Midgard itself may have crossed the path of some through the Books of Beasts, or Tome of Beasts, from Kobold Press. These wonderful bestiaries contain many great monsters and creatures for the 5th edition of the dragon game, which have their background in Midgard.

The Midgard Worldbook has been brought to our attention by Ulisses Spiele, whom publish the German version of the Book, as a possible setting for an upcoming Swords & Wizardry campaign. Kindly, the PDF was provided as review material and was read as the basis for this post.

Midgard comes around with some nice ideas and definitely hits the High Fantasy track of DnD 5e. Dark Fantasy is correct depending on your own assessment, as the dark aspect sometimes shows up stronger and weaker. Midgard is definitely a world of conflict and possible adventure. What would have helped Midgard a bit more would have been a clearer identity, which distinguishes itself a bit more from the generic setting and its many references to existing competing products and real world examples.

Overview of the World

But what does Midgard bring to the table? Midgard is your average Kitchensink setting. A Kitchensink setting brings together many different topics. So we mentally throw a lot of different ideas into a sink and something will stick. That’s the case here, as well as with Pathfinder’s Golarion, DnD’s Forgotten Realms, and many others. So you can see that this is not a unique selling point, nor is it necessarily a bad thing. Many people love Golarion and the Forgotten Realms.

We will not go into the secrets of Midgard, which are explained at the beginning of the book, in this article. as they are intended for the GM. In Midgard are some classic ancestries like giants, trolls, elves, dwarves, humans, goblins and gnomes. In addition to that there are also dragonkin (goblins, dragonborn, lizardfolk, dragons), minotaurs, centaurs, ravenfolk, gearforged, shadow fairies, bearlings and many more. There are 28 common and higher languages. Amongst them such as Infernal, Umbral (language of the shadow fairies), Goblin, the Void Language, etc.

Magic and science also play a bigger role. Thus, there are gunpowder, airships, sandships and many other technical achievements. Among the magic are also some special schools such as dragon magic, ring and rune magic of the dwarves, clockwork magic, the labyrinth magic of the minotaurs, the raven magic of the raven people and many more. Anyone familiar with Kobold Press’s product catalog knows they’ve got a bit of a romp going on there.

Midgard also has ley lines, which are magical in various forms and represent the lifelines of arcane powers. Magic can be amplified with them. Furthermore they can also change and influence the environment by the mere existence of a ley line. As shadow or fairy roads are named paths that make travel over a great distance possible. But if you deviate from these paths you go deeper into the shadow realm and might face great dangers.

For the pantheon Midgard uses some examples from the real world like Loki, Thor, Sif, Wotan, Freya, Baldur, Ouroboros, Boreas, Chernobog, and many more. But Midgard also comes up with some gods of its own.

Midgard itself is divided into 8 regions that have different focuses and identities. Among them are:

Structure of the Book

The book begins with about 40 pages about the background and history of Midgard. This is followed by about 20-40 pages of descriptions of each region. In each region, significant cities are discussed with short banners and core information. This includes important NPCs, main deities, population distribution, most important trade goods, heraldry. In the regions, there are often smaller sections on noteworthy locations. Each region also offers several adventure hooks to provide an entry point or motivation for the game group as to what could be done in that region or why they are there. Depending on the region, there may also be customs or traditions or other special features.

After the region chapters comes the pantheon. Here, the individual deities are depicted with their followers, symbolism, shrines, other representations (called masks) outside their main region, and their demands.

For Dungeons and Dragons 5th Edition, there is the Gnoll Caravan Raider as a new background, features for antipaladins, the Domain of Lust, the School of Blood Magic as a new mage tradition, the School of Void Magic as a new arcane tradition, special non-magical items, drugs and poisons, artifacts and alternate magic (e.g., new conditions through Shadow Magic or talents through Void Magic), and many pages of new spells.

It should be mentioned that there is another book for character options called Tome of Heroes.

What Ideas are inside of Midgard?

Those who know one or the other setting will recognize some aspects here. For example, ley lines are not a unique feature, and a rutted desert due to mage wars exists in at least one of the larger and better known settings. Still, Midgard comes around with some ideas that give it some identity of its own.

The different schools of magic, such as clockwork magic, labyrinth magic and shadow magic, bring their own flair. If you read carefully about the dragon realm, you will find that chromatic and metallic dragons are not associated with any particular alignment. Dragons are individuals and accordingly have their own personalities and thus no predefined moral attitude. At the same time, there are different types of dragons besides colors and metals. Earth dragons, water dragons, fire dragons, wind dragons, void dragons and many more are offered by Midgard. At the same time, the idea of dragon lords as ruling beings is a nice twist to the otherwise gold hoarding dragons of old stories and games.

Corsairs as freedom-loving pirates who do not approve of slavery. Minotaurs who want to regain their homeland and run their own empire and are not just the monsters of labyrinths. There are Cities of nomads drawn by oxen. In the desert are former kings who are resurrected to help in war and crises, but then do not just go back to their graves, but may even claim their old post or get involved in politics.

If you look closely, you will discover many nice ideas. For example, the new 5e status trait, which changes depending on deeds and reflects the rank and name of the players in the world.

Too much and yet not enough

Midgard is a book full of continuous text. While reading, I had the feeling that a lot of information was given, but some of it did not go deep enough, but was numerous, or rather uninteresting. The writing style felt a bit tedious to me and so the book also read a bit tiring.

The setting feels a bit splintered, even taking into account that it is a kitchen sink setting. It is reminiscent of generic settings in many corners. It’s enriched with a flavoring of its own ideas, but references too many other settings or real-world examples for my taste. The Pantheon, for example, makes no sense to me at all. While a Svilland relies completely on Norse deities and a Golarion has its own deities, we have here a wild mix of Norse, Greek, Egyptian, Eastern European figures of mythology and in between own creations.

While reading, some regions felt to me like I could read the foundation right out of it and like it was a simple copy of a region of Golarion or Warhammer Fantasy. In the case of the Wasted West, the Mana Wasteland and the story of Nex and Geb from Golarion with a touch of Lovecraft literally jumps out at me.

In my opinion, the setting could have done with a bit more of its own identity. For many regions, you can very much say “definitely not Scandinavia/Egypt/Germany/Orient”, that’s how strong it is.

The Worldbook as Overview

All in all, I feel the representation as a large book misplaced. A 400+ page overview is simply too much for me to get a quick overview of a setting. Especially when you consider that Kobold Press has its own regional volumes on the City of Cats, Zobeck, the Southlands, and Adventures in the Court of the Shadow Fairies and Margreve Forest. Separate regional volumes would have appealed to me more, as I think the world is more suited to be played in parts and not as a whole. Therefore, I would have been happy with a shorter world book, which would then get me excited about a region in just a few pages, which I can explore further in a more detailed regional volume. The world setting is also less appealing to me and strong in contrast to the competition.

If I have chosen an attractive region to play in, such as the Southlands, then I pick up the more advanced regional volume and (hopefully) get more information about places, dangers, cultures, and life in that part of Midgard. For that, however, I don’t need 400 pages to make the preliminary decision of what to go with.

A Setting for many Tastes

Midgard fits perfectly with the products advertised (Pathfinder + DnD 5e). The game systems aspect is very well met here with a High Fantasy setting and Dark Fantasy is also a fair assessment. The book offers some nice ideas (personal favorites are the Dragon Empire and the Southlands) for lore, setting, ancestries and plot hooks. For fans of ready-made settings to play in, the book is probably just right. As with Golarion and Paizo, I strongly suspect that over time, through further regional volumes or adventures, the world will shape up more firmly and find a stronger tone of its own. I would recommend the world book to anyone who enjoys a somewhat longer introduction to a setting.