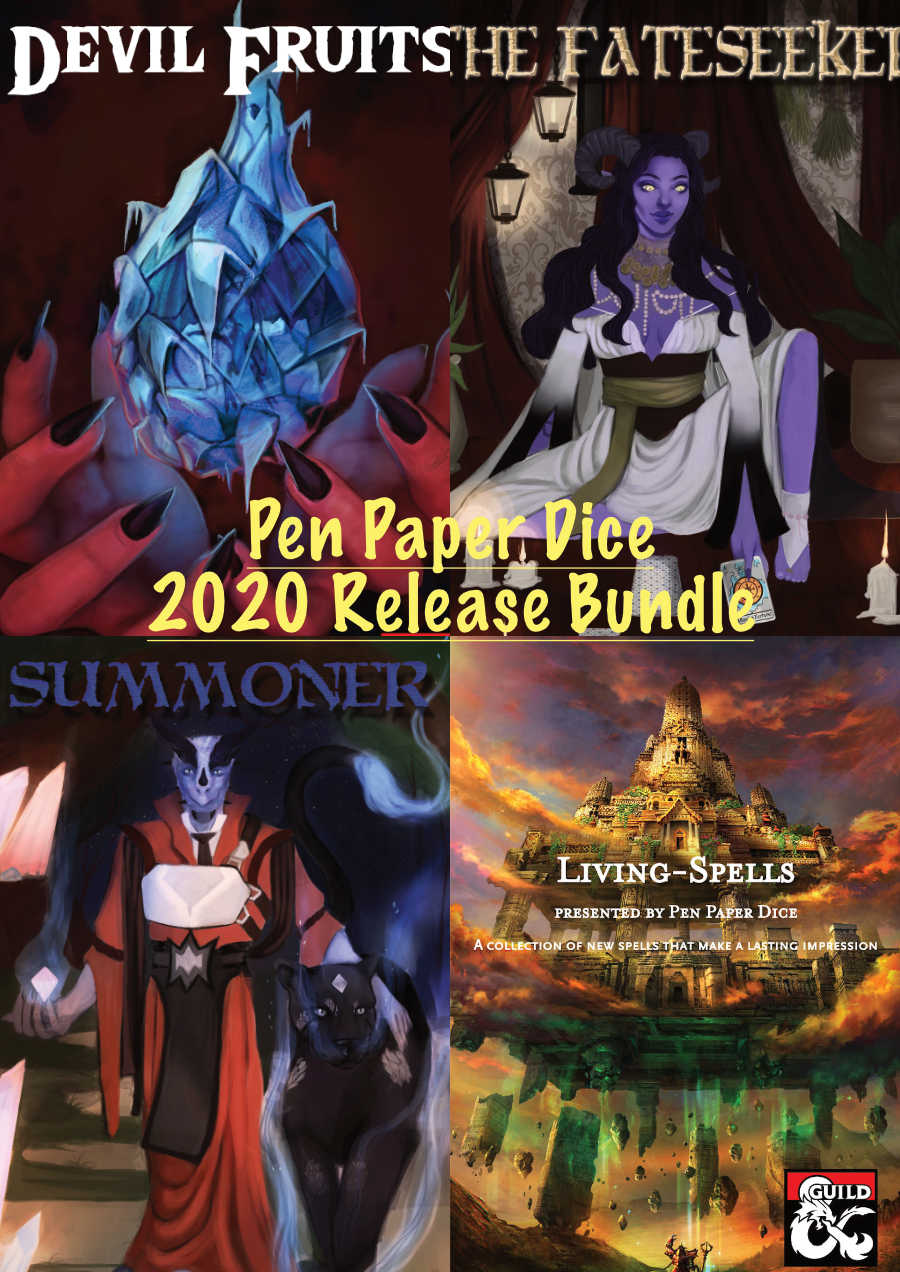 The end of the year is near. For this special occasion, we just packed a little gift for christmas. All our DMs Guild releases of 2020 are in a bundle which is around 36% off the regular price.

So what is inside the Pen Paper Dice Bundle of 2020?

“You want my throne? Then come and get it! These words of Asmo D. Eus marked the start of a new era of adventurers.”

This work contains some snippets of lore regarding the existence of devil fruits in the Forgotten Realms, rules for five powerful, cursed fruits and stat-blocks for corresponding devils that grant some of their power to whoever eats the fruit.

The fruits and devils are:

Every fruit can be trained to evolve or even to unlock abilities. However, all this power comes with a price…

Living Spells contains 22 new spells and descriptions of their 8 creators. To name a few of them:

If you need some new spells, inspiration for plot-hooks based on wild spells or new fun situations in encounters due to uncontrolled magic, check out these living spells!

The mystical connection between The Summoner and his eidolon grants spell-casting abilities similar to those of a warlock, but with a clear focus on conjuration magic.

Because it’s dangerous to go alone, you can choose from three unique types of eidolon that function as archetypes: The Beast, The Mountain or The Conduit.

Each archetype has its own set of distinct evolutions that enhance the eidolon’s abilities in fighting (The Beast), tanking (The Mountain) and magic (The Conduit).

A shared health pool helps the summoner and their eidolon to survive most dangerous situations, even though they are fragile on their own.

This new take on the old, classic summoner is fully integrated within the DnD 5e rule framework and much thought was put into keeping rules consistent with the quality standard set by Wizards.

So what can you expect from the Summoner?

For more insight about the mechanics, we wrote a little article about the designer notes.

While studying stars, constellations, the sun and moon as well as the rare knowledge about fate itself, the mastery of the deck of sixty is their most specific practice. Fate-Seekers use the deck of sixty for fortune telling by interpreting the minor and major arcanas they are able to draw upon. Their mentor grants them their deck and teaches them how to draw cards. Drawing is an act of magic and therefore not something mere men might accomplish. After studying the art of channeling magical energy through the cards, the next step is to predict future and fate from the cards drawn.

As with the summoner, we wrote a little article about the designer notes for the mechanics of the fate-seeker.

So if you are eyeing with two of these releases, you might want to consider getting the whole package for roughly the same price. As always, we are happy for any feedback you might provide :-).

Merry Christmas to all of you!